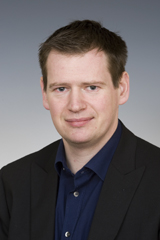 Peter Cranie is an anti-racism activist, who has been involved with the Merseyside Coalition Against Racism and Fascism. He re-established Liverpool Green Party in 2002 and since then the local party has won two council seats. He is a former Elections Co-ordinator for the national Green Party.

Married, and a new father, Peter has a wide range of experience:

Peter is an economic migrant to England. His family moved from Scotland in the early 1980s as manufacturing jobs and employment collapsed under the early years of the Thatcher government. He has lived in England for over 25 years and in the North West for over a decade.

The Greens are the only party in Britain to score 100% on our Euro MP expenses in Europe. That means no other parties are giving you a full and honest account about how they are using their expenses or employing their staff.

Only the Greens can be trusted to give you the whole truth.

The Greens work hardest for you in Europe.

The other parties receive tax payer money from Parliament. They all have big debts and therefore have to rely on big donations from wealthy businessmen. Only the Greens are funded by ethical donations from people like you, who want to support real policies that make a difference to our future.

The Greens will stand up for you

This election is about who else you want to put into the European Parliament. The Greens have received support from other parties and former Labour and Lib Dem councillors who are backing us to stop the BNP by finishing ahead of them to win the last seat.

Voting Green will keep the BNP out of power

Membership of the Greens is growing fast, up by over a half in the last five years, and we want you to get involved in helping us to change things for the better.

Our local councillors are right at the heart of their local communities. They work with people every day to deal with everyday problems, whether that is bin collections, safer streets or protecting green spaces.

Our party is also committed to tackle the much bigger issue of Climate Change. We want councils to understand the amount of CO2 emissions they are responsible for, and to adopt progressive and money saving policies. For example the Green initiative in Huddersfield. In just one town, Green councillors have put together a scheme that has:

This is the "Green New Deal" in action.